Businesses urged to be diligent and careful in navigating sanctions

A trade compliance expert with Rockwell Automation is urging businesses to be diligent and careful as they navigate the web of international sanctions.

Sanctions leveled against Russia, their resulting impacts, as well as pre-existing trade issues with China were all discussed yesterday during an event in Johnson Creek, organized by the Madison International Trade Association and International Credit Executives.

“Currently there is over 30 countries that have implemented sanctions against Russia,” Wolske said. “So if your organization has multiple jurisdictions — if you have legal entities in the EU, in Canada and other countries — you have to be mindful of that.”

She noted Rockwell is one of more than 600 companies that have suspended operations in Russia or otherwise left the country following its aggression against Ukraine.

Ngosong Fonkem, a Milwaukee-based trade compliance lawyer with the Chicago law firm Page Fura, highlighted a three-pronged approach to recovering from or preventing trade disruption. This strategy involves anticipating possible impacts of global shifts, conducting data analysis as part of a cost-benefit analysis, and ultimately responding in a way that mitigates disruption.

See the full story at WisBusiness.com. 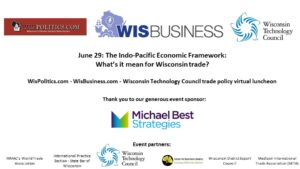 President Biden in May announced the framework aiming to combat inflation and lower costs. Partners of the trade initiative include: the United States, Australia, Brunei, India, Indonesia, Japan, Republic of Korea, Malaysia, New Zealand, the Philippines, Singapore, Thailand and Vietnam. Critics have noted the absence of Taiwan and Canada.

Tom Still, event moderator and Wisconsin Tech Council president, noted 15 percent of state exports in 2021 were tied to one of the countries in the Indo-Pacific framework.

The initiative is not a trade agreement, but a format for future discussions on trade and could lead to trade negotiations. The framework is based on four pillars: connected economy, resilient economy, clean economy and fair economy.

Katy Sinnott, vice president of global trade and investment with the Wisconsin Economic Development Corporation, said the framework will boost discussion with the federal government and open new doors for the state that are “sometimes hard to open,” including in e-commerce and agriculture.

Sinnott also said the framework could bring growth in the machinery, medical and scientific instruments sectors.

“There’s a hope that barriers will be reduced. There will be more transparency in the trade so that our companies won’t be as concerned about possibilities of not getting paid or having the product not land as it should,” Sinnott said.

The Ocean Shipping Reform Act was recently approved by members of Congress and now heads to President Biden’s desk. The Green Bay-based co-op says the bill is meant to address “exorbitant fees” levied by ocean carriers and “cracks down” on companies that refuse to ship agricultural products.

“Providing more safeguards against unreasonable and unfair practices by shipping companies will help ensure our products get to market in a timely and affordable way,” Brody Stapel, the co-op’s president, said in a statement. “Clearing out shipping backlogs is important to untwisting the supply chain and reducing costs for farmers, exporters and our customers.”

“During the pandemic, ocean carriers increased their prices by as much as 1,000%. And, too often, these ocean carriers are refusing to take American exports back to Asia, leaving with empty containers instead,” he said in a statement. “That’s costing farmers and ranchers — and our economy — a lot of money.”

Speaking at a WisPolitics.com event this week in Washington, D.C., the Madison Dem discussed the latest iteration of the bill, now called the U.S. Innovation and Competition Act. Originally touted as a way to keep the United States competitive with China through measures aimed at advanced manufacturing and technology research, it now has a focus on addressing pandemic-related supply chain issues.

“The pandemic really showed if there is a global demand, and we do not produce it ourselves, that we can be left in short supply and that’s indeed what happened,” Baldwin said.

She explained that at the start of the pandemic, major vehicle manufacturers estimated consumers wouldn’t be buying as many cars and reduced their orders for microchips. But when that prediction turned out to be wrong, “you were seeing car lines closing, plants on hiatus because they didn’t have the microchips they needed,” she said.

She added that U.S. inventors created the first microchips, but the United States currently doesn’t produce them on an appreciable scale. Baldwin said that needs to change.

The investigation was launched in response to a complaint by a California manufacturer called Auxin Solar, which argued the imports from the four southeast Asian countries represent “pervasive backdoor dumping” by China, the Associated Press reported.

If the federal agency determines rules aimed at blocking products from China are being violated, Renew Wisconsin says “very high tariffs” will likely be enacted on these products, putting many solar projects in jeopardy. 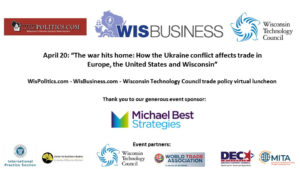 As the war in Ukraine disrupts supply chains for fertilizers, grains and other agricultural products, the head of the Wilson Center sees a chance for Wisconsin ag industries to step in.

Mark Green is president, director and CEO of the nonpartisan Wilson Center in Washington, D.C. and a former state lawmaker, congressmen, ambassador to Tanzania and US AID director. His remarks came yesterday during a virtual trade policy luncheon hosted by WisPolitics.com, WisBusiness.com and the Wisconsin Technology Council and featuring ambassadors from Wisconsin.

“Russia and Ukraine have been the source for so many of those inputs, chemicals and fertilizers in particular, so I think that is an opening for Wisconsin agribusiness,” he said.

When asked “how much is enough” when it comes to imposing sanctions on Russia’s economy, the ambassadors agreed sanctions should be maintained or even expanded.

“I would be in favor of ratcheting up those sanctions tougher than where they are right now,” he said. “Cut off his energy revenue and ultimately bring an end to this guy and his rule.”

Tom Loftus, a former U.S. ambassador to Norway and former speaker of the state Assembly, added sanctions “are the new containment strategy. They’re not going to go away.”

Meanwhile, U.S. Ambassador to Luxembourg and former Milwaukee Mayor Tom Barrett expressed “guarded hope” that the international community can mitigate impacts of the conflict on fuel supplies and energy prices globally. He also said sanctions have “clearly” had an economic impact on Russia.

“The more we can just keep our foot on the gas pedal with these sanctions, I think that that’s very, very important,” he said.

Watch a video of the discussion here.

The head of Wisconsin Manufacturers and Commerce warns rising energy costs tied to the war between Russia and Ukraine will impact factories and consumers in the state.

WMC President and CEO Kurt Bauer said in a statement the immediate impact of Russia’s invasion of Ukraine will drive energy costs “even higher than they already are.”

“Rising energy costs are very regressive for consumers, especially during the home heating season. But rising costs will also have a major impact on factories in a manufacturing state like Wisconsin,” Bauer said. “Higher producer costs are upstream of consumer costs, which means the Russian invasion will exacerbate existing inflationary pressures.”

Meanwhile, a trade consultant with the Wisconsin Small Business Development Center says exporters will need to prove their products will not end up in the Donetsk and Luhansk separatist regions of Ukraine, under federal sanctions.

“There is a potential upside, however, for organizations with the foresight to mobilize considering disruptive scenarios — and respond in a way that ultimately powers their performance,” the SBDC’s Chris Wojtowicz wrote in a blog post.

Supply chain experts on a recent webinar spoke to the importance of working with a trusted broker while navigating international trade.

In her role at Germantown-based MOTIS Brands, Pasbrig works with over 30 suppliers throughout China, Taiwan and Mexico. The company sells transportation equipment including lifts, ramps and covers.

“Use each others’ experience and knowledge, share information with each other as much as possible,” she said yesterday. “It can be the difference between your imports coming in smoothly, or things getting hung up during entry when not all the right information is there.”

“Talking Trade” with Drew Slocum, executive for Bank of America 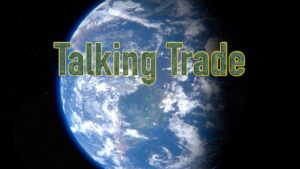 In the latest episode of “Talking Trade,” Bank of America executive Drew Slocum discusses how his team helps companies navigate the intricacies of international trade.

“The last 18 months, what we’ve seen companies work through has been unique, different and challenges that most of our companies have never faced all at one time,” said Slocum, senior vice president and marketing manager for the company.

The show touches on rising inflation and interest rates as well as supply chain and labor issues, along with how financial institutions and their corporate clients are grappling with these trends.

“We’ve seen borrowing ramp up quite a bit really across the board, as companies are faced with higher costs, but also as they think about trying to get ahead of inventory issues,” he said. “More advanced purchasing on inventory … trying to make sure they have the components on hand so they can meet the demand that they’re seeing.”

Watch the show
See the archive

Policy primer: The U.S. – China relationship under the Biden administration

The course of relations between the U.S. and China continues to be a top foreign policy priority under the new Biden administration. President Biden recently singled out China as “the greatest geopolitical test” of this century. The path forward on China will now be determined by a different circle of leaders and influencers in the Biden administration than the past four years. We will see them take a different approach to addressing much of what are the same threats and challenges with China.

Businesses urged to be diligent and careful in navigating sanctions

From dairy to tech: How smarter immigration policy can help the Midwest workforce

Trade Reset: How a New Washington, D.C., Administration May Change Trade Policy Near and Far