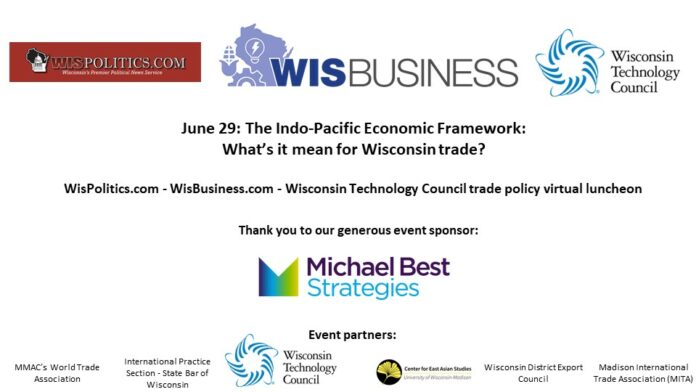 President Biden in May announced the framework aiming to combat inflation and lower costs. Partners of the trade initiative include: the United States, Australia, Brunei, India, Indonesia, Japan, Republic of Korea, Malaysia, New Zealand, the Philippines, Singapore, Thailand and Vietnam. Critics have noted the absence of Taiwan and Canada.

Tom Still, event moderator and Wisconsin Tech Council president, noted 15 percent of state exports in 2021 were tied to one of the countries in the Indo-Pacific framework.

The initiative is not a trade agreement, but a format for future discussions on trade and could lead to trade negotiations. The framework is based on four pillars: connected economy, resilient economy, clean economy and fair economy.

Katy Sinnott, vice president of global trade and investment with the Wisconsin Economic Development Corporation, said the framework will boost discussion with the federal government and open new doors for the state that are “sometimes hard to open,” including in e-commerce and agriculture.

Sinnott also said the framework could bring growth in the machinery, medical and scientific instruments sectors.

“There’s a hope that barriers will be reduced. There will be more transparency in the trade so that our companies won’t be as concerned about possibilities of not getting paid or having the product not land as it should,” Sinnott said.

Sinnott also during the talk said Wisconsin exports $1.8 billion to countries in the framework and added the state’s total trade for 2021 was $24.8 billion.

Ralph Inforzato, chief executive director of the Japanese External Trade Organization, noted the United States has been largely absent from the region of late.

“We’ve been absent from this area since President Trump pressed the delete button on the Trans-Pacific Partnership,” Inforzato said. “So this immediately gets us back into the region as a framework, not as a trade agreement. But the perception is it may lead to a trade negotiation.”

“They have China on their mind and they need those markets,” Inforzato said. “So they have to be in this kind of balancing mechanism on joining the Indo-Pacific economic framework, but they also have — I’m going to use the term ‘money in the bank’ — with dealing with the Chinese market.”

John Ohnesorge, director of the East Asian Legal Studies Center at UW Law School, said if the Biden administration ends up lifting tariffs on China, that could help production in the United States and possibly reduce inflation.

“On the other hand, it seems like nobody wants to be seen as being a friend of China at this point. It’s sort of toxic politically,” Ohnesorge said.

Ohnesorge added the framework could be “really bad for global prosperity” if China finds an alternative to the SWIFT international credit card transaction system.

“The only way it’ll come to that is if China is really excluded in some way, and they feel that they’re excluded,” he said.