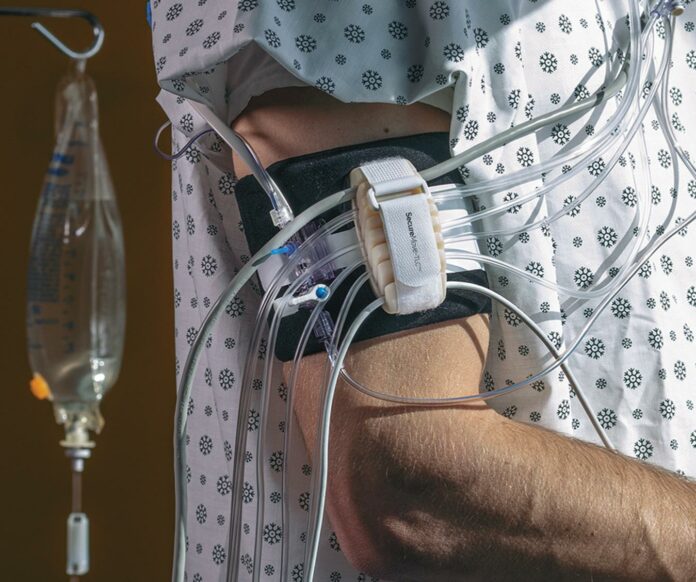 — RoddyMedical, an early-stage startup based in Wauwatosa, is gearing up to begin production of a wearable medical device after closing a $600,000 investment round.

Founder Lindsey Roddy created the business to solve a real-world patient safety issue she observed while working as a nurse in the intensive care unit. The SecureMove-TLC is a single-use device that organizes and secures cords, IVs and other medical tubing to avoid these lines getting tangled or accidentally removed during patient transport or treatment.

In one such case, one of Roddy’s patients’ life support lines was pulled out while the patient was being helped out of bed for post-surgery therapy. This “jarring experience” gave her the idea for the device, for which production will begin next month. It’s designed to be worn by the patient as an armband but can also be affixed to a hospital bed or IV pole.

The recently closed funding round included investments from the Winnebago Seed Fund, based in Neenah, and the Madison-based Winnow Fund, both of which were launched with support from the state-backed Badger Fund of Funds.

“Lindsey Roddy’s years of first-hand clinical experience and connections have driven the product and team forward and ensured that the product design meets the needs voiced by frontline healthcare workers,” said Richelle Martin, managing director of the Winnow Fund.

In a statement, Roddy notes that the company’s product manufacturing partners are based in the Midwest and were chosen to “purposefully support the state and region.” The wearable device has been developed with grants from the Wisconsin Economic Development Corporation and support from the Regional National Science Foundation I-Corps program.

Pat Deno, chief operating officer for RoddyMedical, explained that the new funds will be used to scale up manufacturing and launch the product. Although the device can’t be piloted on patients until registration with the FDA is complete, she noted several hospitals in the Milwaukee area have already been provided prototypes. She says FDA approval is expected in early October.

Once the device is officially launched, Deno said the company will be selling directly to hospitals as well as original equipment manufacturers.

Listen to a recent podcast with Martin: https://www.wisbusiness.com/2021/wisbusiness-the-podcast-with-richelle-martin-managing-director-of-the-winnow-fund-2/