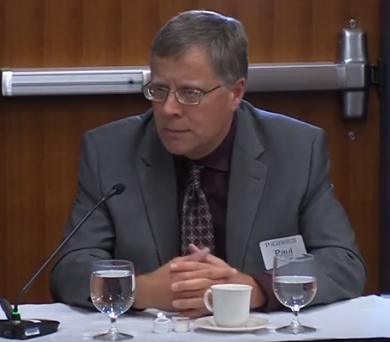 Agriculture experts see a difficult road ahead for farmers in the state as they struggle with wet conditions, the ongoing trade war and low crop prices.

“Anybody in ag lending can talk about it. All the capital is gone — the working capital, the liquid capital, the current ratio — whatever you want to use for a measure,” said Paul Mitchell, executive director for the Renk Agribusiness Institute. “We’re leading the nation in farm bankruptcies as a state.”

Mitchell spoke last week on a panel of industry experts at UW-Platteville to discuss some of the difficult hurdles Wisconsin farmers are facing. The event was part of WisBusiness.com’s “Navigating the New Economy” series, supported by the Wisconsin Academy of Global Education and Training.

“Equity is always hard to scrounge up,” said Anna Landmark, a cheesemaker and owner of Landmark Creamery in Belleville. “There’s not a lot of grant programs for food businesses of my size to take advantage of… so growth has been a challenge.”

Several of the panelists described a sense of overwhelming stress as farmers try to make it through to next year.

“The capital has been sucked away, and it’s going to take a while to build those reserves back up again,” Mitchell (pictured here) said. “The stress will stick with us for a while in farming. It’s not like every farmer is struggling, but a lot of farmers are — more than they were five years ago.”

Agriculture Secretary Brad Pfaff noted exports for the first half of this year were down 7 percent compared to the same period last year. Wisconsin exported more than $1.6 billion in agricultural products to 125 countries during the first six months of 2019.

Mitchell explained that many categories in the broad ag sector have been underperforming for years, including corn and soybeans operations, cranberry growers, vegetable processors and dairy farmers large and small.

Wisconsin’s cranberry farms supply around half of the world’s demand for the fruit, he said, but growers are grappling with low prices. And the state’s vegetable processing industry — the second largest in the country — is also in decline, according to Mitchell.

“There’s no good crop to go grow,” he said. “A lot of people are desperate for an easy answer. I don’t think there’s a quick and easy answer. It’s going to take a long time to get out of this trough.”

The ag sector contributes more than $104 billion each year to the state’s economy, and supports one out of every nine jobs in Wisconsin. With around 60,000 farms and over 7,500 dairy farms alone, these issues touch communities spanning the entire state.

Pfaff described these farms as economic engines, just as worthy of support as the state’s other top sectors.

“Just like we want to invest in industry and other high tech, we should invest in agriculture,” he said. “On the farm, all the way to the processing.”

Rep. Travis Tranel, a Republican lawmaker from Cuba City, is one of the few farmers in the state Legislature. He agreed this year’s growing season has been particularly tough, with many farmers “just putting in a crop so they have something to look forward to.”

But he criticized legislative efforts to fund mental health programs for farmers, saying “$2 to $3 million toward mental health for ag is not going to do a darn thing.”

He added: “Farmers need markets to sell product to at an affordable price so they can pay their bills. Short of that, you’re not going to accomplish anything.”

Tranel described a “huge disconnect” between members of the legislature and the farming community, and he expects this gap will only become harder to bridge.

“Now, when I talk to my colleagues, at least some of them have a basis of knowledge when it comes to agriculture,” he said. “But in 10 or 15 years, these constituents of our population are literally going to be generations removed from the farm.”

Tranel explained that over the past 50 years or so, U.S. farmers were focused on how to produce enough food to feed the world’s growing population. But now, he said, “we need to start figuring out the next component.”

“We have enough production,” he said. “We’re very good at producing things.”

He said just 2 percent of farmers could feed the world and then some, adding “we don’t have a food shortage coming.”

“They absolutely need help, and I don’t want to discourage that,” she said. “But we also need to find ways to support the small farmers too who are looking to get in.”

She said many young people are “very interested” in going into farming but added it’s almost impossible for most given the struggles existing farms are up against.

Charles Irish is the emeritus Volkman-Bascom professor of Law and former director of the East Asian Legal Studies Center. He suggested farmers in Wisconsin that are desperate for new markets should look to parts of Asia.

“I travel a lot throughout north and southeast Asia. Wisconsin is a brand in that part of the world — it is very well known,” Irish said. “And it also is a place of significantly growing affluence.”

He said that China is likely to remain a “prickly market” for the foreseeable future but added many other countries in the region represent a significant opportunity.

“For straight exports, east Asia — north and south — would represent a very attractive market,” he said.

Watch a video of the discussion here: http://www.youtube.com/watch?v=qCf2Mh2-nko&feature=youtu.be

See more on the “Navigating the New Economy” series: http://www.wisbusiness.com/2019/navigating-the-new-economy-roundtable-discussions/