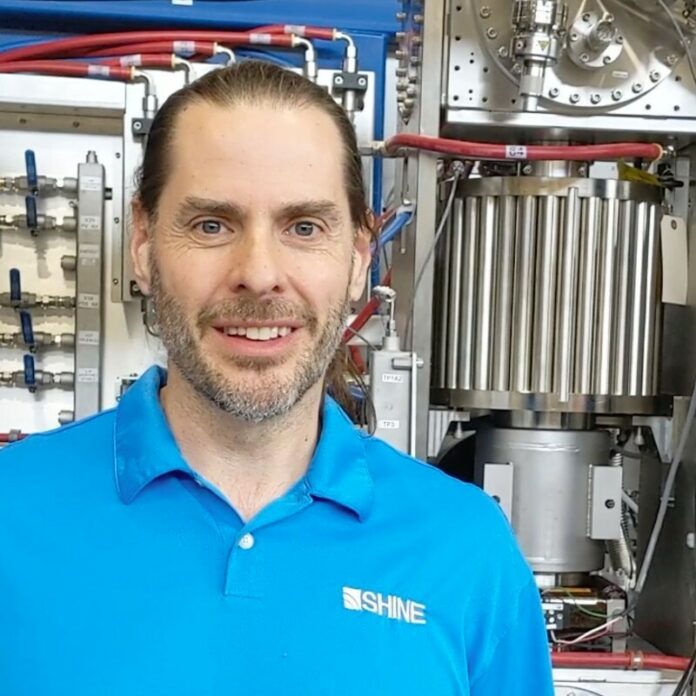 The head of SHINE Technologies says the company is “at the end of a long road” with its Janesville medical isotope production facility set to go online next year.

But the journey won’t stop there, CEO Greg Piefer told WisBusiness.com in a recent interview, as this step represents just the second phase of a four-part plan that could span decades to come.

SHINE Technologies was founded by Piefer in 2005 with an ultimate goal of developing nuclear fusion-based energy production. But to reach that result, he knew the company would need time to build its technical capabilities while delivering value in the near-term. That led to the creation of the plan’s four phases, representing “the intersection of reasonable advancement and clear unmet market needs,” he explained.

The first phase, which involves using fusion-based techniques for materials imaging, is commercialized and growing, Piefer said. This method of non-destructive testing, similar to X-ray technology, uses neutrons instead to inspect certain materials in aerospace, defense manufacturing and other industries.

He said only nuclear reactors had historically produced enough neutrons to sustain this type of imaging. But SHINE developed a way to use nuclear fusion to meet this need “with a much cheaper, cleaner, safer system” that’s more cost-effective as well.

“My hope is that ultimately as the old reactors go offline, we become absolutely instrumental to the continuity of that supply chain and even increase access to neutrons so other manufacturers who aren’t currently using them can make better, safer products,” he said.

To reach the next step of the plan — medical isotope production — the company had to increase its system’s output by a factor of 100, while bringing down the cost per neutron by a factor of 1,000, he said. SHINE has now “proven all the technologies we need,” and received regulatory approval to build the world’s largest medical isotope production facility in Janesville.

By taking uranium that “at one point was either destined for or part of nuclear weapons” but later rendered safe to use and altering it with neutrons, the company can produce critical medical isotopes such as molybdenum-99. This material is used in millions of medical tests worldwide each year, but Piefer said supply chains for this and other isotopes with medical applications are strained due to older nuclear power plants going offline.

“We turn uranium — once part of nuclear weapons programs — into medicine,” Piefer said. “We buy that material, once it’s been made safe, for something like dollars per gram. But [molybdenum-99] … is worth like $150 million per gram. So we say we’re taking low-value things and turning them into what I call hyper-value things.”

Looking ahead, Piefer says the company is “really ramping up our efforts” in pursuit of nuclear waste recycling, which represents the third phase of the company’s long-term plan.

“The goal is to use those core competencies we’ve developed in phase two, increase the scale, and use them at the next scale up,” he said. “The simplest way to think about it is just decreasing the cost of fusion still further, and we’re really well-positioned to do that.”

He explained that waste from nuclear fission power plants — for which the United States has no long-term disposal pathway — has a “tremendous amount of energy” left in it that can be recycled.

“In some way, our phase three is kind of like becoming the nuclear garbage people … and hopefully doing the world a really big service,” he said.

Once the company’s nuclear fusion capabilities have been scaled up to the degree necessary to achieve this step, Piefer said the technology starts to “look a lot like what you would build as a fusion power plant.” But with the current understanding of nuclear fusion technology, he said there’s more money to be made per reaction recycling waste than there is producing electricity.

He said the cost of fusion energy production will need to become “super, super low” for phase four to be achieved.

“We don’t quite know how to do this part yet, but it’s our hope that in phase three we’ll build enough of these large-scale fusion systems, operate them enough, establish supply chains … and continue to see evolution in the technological environment that lowers the cost of fusion still,” he said.

To reach this goal, he said the cost of fusion needs to be lowered by a factor of 15. Compared to the progress the company has already made in earlier phases, he said “it’s actually getting easier as we go forward.”

Piefer said the company is eyeing pilot plants for phase three in the next five years, and scaling those efforts within the next 10.

“Phase four I think is a bit difficult to speculate on, because I think all of the technologies needed to go from phase three to phase four … have not yet been demonstrated,” he said. “We think of that as sort of the 10-to-20 year timeframe.”