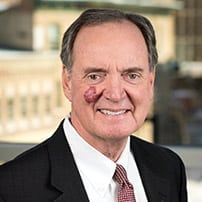 WEDC CEO Mark Hogan today said he will step down from his role in the coming months.

Hogan confirmed his plans at the Milwaukee Rotary Club this afternoon but failed to provide a specific date for departing the state’s jobs agency.

WEDC spokesman David Callender told WisPolitics.com today that Hogan’s plan dating back to former Gov. Scott Walker’s time in office was to leave sometime in the fall of 2019. Callender added that Hogan still has a number of projects in the works, and his departure would be based on the completion of those projects.

A spokeswoman for Gov. Tony Evers noted that he has “a good and productive relationship” with Hogan and “appreciates both his leadership at the Wisconsin Economic Development Corporation and his service to the people of Wisconsin.”

A bill Republicans approved in the lame-duck session stripped Evers of the power to appoint the WEDC leader until September.

“The staff at WEDC do great work promoting economic development of all shapes and sizes,” said spokeswoman Melissa Baldauff. “Ensuring that those efforts continue in the future is a top priority for the governor.”

“There was probably a point where they felt a little under the gun,” he told WisBusiness.com. “And I think while there were issues to be worked out, Mark has made it clear that he was going to take responsibility for those issues.”

Still said WEDC staff members have been “really performing quite admirably,” especially given the size of the jobs agency.

“He did a good job of taking the politics out of the organization, which allowed the staff to do their jobs,” he said.