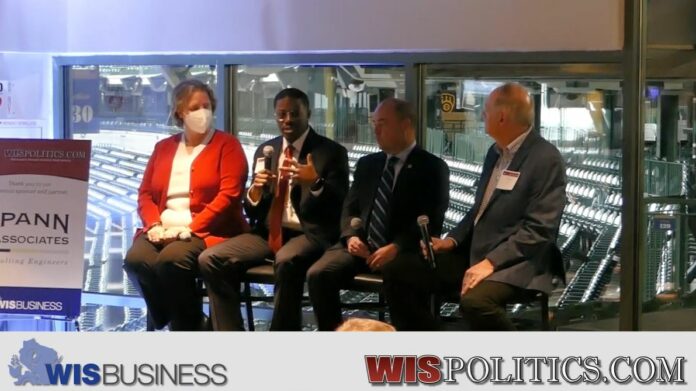 Officials agree new federal infrastructure dollars coming to Wisconsin are an opportunity to address workforce issues by getting more people into the trades.

“I’d see this as an opportunity to invest in our communities to get people trained up, to get them connected with good, family-supporting jobs at a living wage or higher,” Madison Mayor Satya Rhodes-Conway said yesterday during a WisPolitics.com/WisBusiness.com breakfast in Milwaukee.

Department of Transportation Secretary Craig Thompson echoed the mayor’s sentiment, also pointing to the state’s aging population and the impact of the pandemic on the labor market as important factors. With tens of millions of dollars coming down the pipeline for a wide array of infrastructure investments in the state, he underscored the potential for workers seeking better employment options.

Panelists highlighted the importance of training and apprenticeship programs, as well as stimulating interest in the trades among young people in the state. Milwaukee County Executive David Crowley, whose father was a master electrician, said “we have to figure out how we’re introducing more young people into the trades, particularly right now.”

Meanwhile, Milwaukee Metropolitan Sewerage District Commissioner Jeff Stone said the state has a chance to “create that next generation” with the funding coming to the state.

“When you look across what are the resources that are going to be valuable going forward — people, manpower are what’s going to be there,” said Stone, a former Milwaukee-area Republican Representative who led the Public Service Commission’s water division before joining Kapur & Associates. “Everybody can get the equipment, they can get the technology, but we need to optimize the people that we have and that human resource.”

Panelists also touched on some of their top priorities to accomplish with the federal dollars, including repairing bridges, replacing lead pipes, expanding public transit, and developing Amtrak passenger rail lines.

Thompson explained about 63 percent of Wisconsin’s 14,000 bridges are part of local systems and the rest are under the state’s purview. While about 2 percent of state bridges are in poor condition, that number is 10 percent at the local level.

Although any funding proposals will have to pass through the Legislature’s Joint Finance Committee, he argued that much of the $45 million per year coming to Wisconsin for bridges should go to the local governments — “because that’s where the biggest need is right now.”

Rhodes-Conway noted Madison’s John Nolen Drive bridges “are not in great shape, and need investment.” But she added this funding will help support development priorities across the entire state.

“It’s the kind of thing that allows cities — not just Madison, right — but cities all across the state of Wisconsin, to look into our capital improvement plans and say, what are these critical projects that we can get done now with this federal money?” she said.

Stone credited Madison as “a national leader” on replacing lead lateral service lines, also noting Green Bay recently completed its own work on removing lead pipes. But he said Milwaukee “has the largest problem in the state” with over 100,000 lead laterals that need to be replaced. He called for strategic coordination efforts to reach multiple targets at the same time.

“So let’s think strategically about how we replace the water mains, then we do the road projects and the laterals simultaneously,” he said. “I think that’s the way we can get the biggest bang out of those dollars that are coming.”

Crowley spotlighted the role of expanding public transit in economic development for Milwaukee, pointing to a planned Bus Rapid Transit project connecting the city’s east and west sides. He said he’d like to see another BRT running north to south on Milwaukee’s 27th Street, adding that area has many individuals without access to a vehicle of their own.

“When you count the many jobs and businesses that are actually on that corridor, this is a corridor that we can get people flowing on that’s going to move the economic development of human capital and make sure our economy continues to grow,” he said.

Thompson also highlighted a planned passenger rail service connecting the Twin Cities, Milwaukee and Chicago. Wisconsin and Minnesota submitted a joint funding application to the federal government and received over $45 million for the TCMC, he explained. He said the service will begin daily round trips starting in 2024.

“We think that’s going to be hugely successful,” he said. “There’s a lot more to come there.”

He also pointed to the Hiawatha rail service between Milwaukee and Chicago as “one of the most successful Amtrak routes in the country.” He said the line is working toward running eight round trips a day. Thompson also noted much of the federal funding for rail is going to Amtrak rather than the states, but said the company is eyeing several routes within Wisconsin.

“They’re going to be looking at those routes, we’ll be talking to them. So I think there’s a lot of possibilities,” he said.