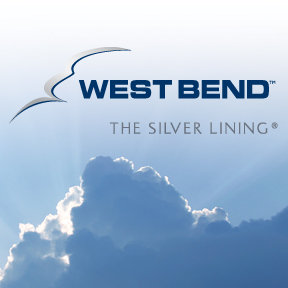 West Bend Mutual Insurance is expanding into new markets nationwide with a nod to its Midwestern roots.

Using the Silver Lining brand, West Bend is branding new markets in Southeast and West with a tribute to its home turf. Short ads and a company film highlight neighbors helping neighbors after last year’s historic derecho that slammed a sizable chunk of Iowa and other Midwestern states.

“Weather of course is a big portion of the claims that we have but never, never in this company’s history more so than it was last year,” said Jim Schwalen, West Bends’ vice president of marketing.

The company normally processes 6,000 weather claims a year. In the first week after the Aug. 10 derecho, it processed 6,300 claims.

“This company is extraordinarily focused on service to our policyholders and being there when people need us,” Schwalen said.

It was all hands on deck taking care of customers. People with roles outside of claims fielded phone calls and assisted policyholders. Schwalen recalled shuttling gasoline from Wisconsin to Cedar Rapids so employees could drive. His time in the area was an emotional experience, but the “silver lining” was seeing people helping people.

The ads are a way West Bend could respectively tell the story, he said, adding that it shows the strength of the Midwesterners enduring this storm and helping each other through the tragedy.

Some of the ad spots began airing last month exclusively in Iowa, and others will air in other states West Bend is already established via television, broadcast, streaming and digital. The company video will play for independent agents selling West Bend insurance.

West Bend has been in Wisconsin since 1894. It wasn’t until around 1940 the company began expanding outside of Wisconsin into neighboring Midwestern states, such as Minnesota, Iowa, Indiana and Illinois.

Just over five years ago, West Bend began efforts to expand. New markets for the home, auto and business insurer include Michigan, Ohio, Tennessee, Kentucky, Virginia and North Carolina. The company has plans to target Arizona in 2022 to become the center of a western expansion.

The challenge with expanding into new markets is building trust with independent agents. West Bend sells through agents, which people go to for insurance. The agent recommends the best company for the client. Those recommendations, Schwalen said, are based on trust, and the new commercials are a way to show West Bend cares about its customers.

It’s also a way for the company to reduce risk. In a smaller geographic area, an insurance company is subject to more volatile profit results based on the weather. As a property casualty insurance company, West Bend’s dollars go to claims after weather catastrophes like severe cold, hail, wind or tornadoes.

“More business in a broader area minimizes that risk,” Schwalen explained. He said another reason for expansion is simply to write more business.

“The fact that we’re expanding into some states shouldn’t at all call into question our commitment to the state of Wisconsin as to where our home is, as to where our employees mostly are, and to where we want to call our home office and to continue to grow and do business in Wisconsin,” he said.

He noted Wisconsin’s reputation as an insurance powerhouse and having a good insurance environment from a regulatory perspective.

“We have a lot of opportunities here at West Bend for new hires and new people because of the expansion and because of the very successful growth we’ve had … We’ve grown at about double the rate that the industry itself has grown,” Schwalen said. “We probably need to hire in the neighborhood of 70 people in the next year, and we’re excited about that.”