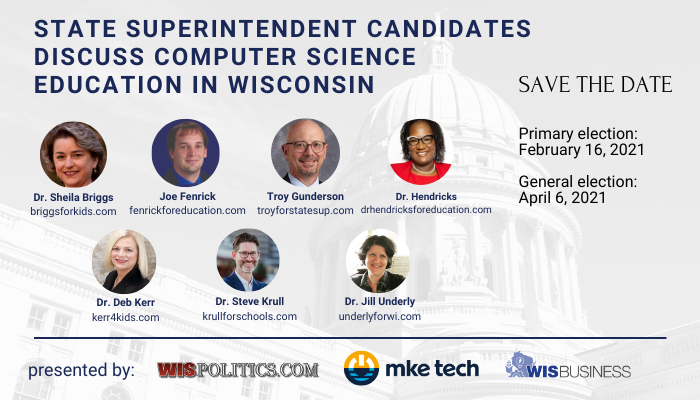 All seven of the state’s school superintendent candidates agreed that Wisconsin needs to increase the technology literacy of its students — but each contender has a different plan to get there.

In a webcast series with WisBusiness.com-WisPolitics.com released earlier this month, in partnership with Milwaukee Tech Hub Coalition, each candidate shared ideas to move Wisconsin forward in computer science education.

“We need to better connect the dots between our schools and our economic workforce needs in all of our communities,” said Deb Kerr, the executive committee member for the American Association of School Administrators.

According to Kerr, Wisconsin has educational standards now, but some of those standards were established without talking with businesses. The state’s current standards need to be changed to drive the success of the children of the state and give them the opportunity to have a career they are excited about, she said.

This was done to ensure all kids have exposure to computer sciences that build up as students progress through school, Briggs explained. She said the state needs to grow the program for it to be more successful.

In 2018, only 21 percent of students taking the AP computer science exam were female and only 2 percent of those students were African American in Wisconsin, she said, adding that those numbers need to increase to accurately represent the state.

“I will ensure that each and every last one of our Wisconsin students receive computer science beginning in elementary through the high school grades,” Hendricks said. “It is paramount.”

“We need to address that and make sure people are trained in computer education,” he said. “We need to really prioritize that ‘doing’ rather than having [students] just be able to use it.”

“As I’ve talked with teachers around the state, most schools are lacking a computer science teacher,” he said. “I would love to see one everywhere, and we need to focus on robotics as well, computers and robotics are the future of most industries.”

Fenrick added that broadband infrastructure is a prelude to computer science education. All residents need to have affordable internet access, he said, adding that $100 per month for internet is too expensive for most families.

Troy Gunderson, an adjunct professor of school finance at Viterbo University, agrees with Fenrick that Wisconsin needs better and more broadband access for students. He said one-quarter of the state has poor access to broadband internet.

He also said the state needs to redefine “workplace-ready” and develop standards in computer science to ensure Wisconsin is putting students in the best situation to enter the workforce and succeed.

The candidates meet Feb. 16 in a primary with the top two vote-getters moving on to the April 6 general election.