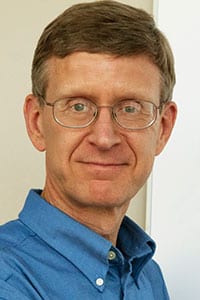 Morgridge Institute for Research Virology Director Paul Ahlquist identifies both research advancements and social science as the key to tackling the next pandemic.

The private biomedical institute works closely with UW-Madison and has the flexibility and risk capital to pursue unproven research questions. Morgridge has long worked on viruses related to COVID-19 and other dangerous viruses, such as Zika.

Some of that research includes identifying host cell factors that viruses depend on in order to replicate. Some of these host functions and pathways appear to be required by many different viruses. Identifying those pathways can be a basis for broad-spectrum antivirals.

Other work focuses on finding the relationship between the virus and human proteins, which are the machines cells use to carry out their functions. Tracking which viral proteins directly work with human proteins in human cells affected by the virus can also provide new ways to disrupt infection.

Ahlquist’s team has been generating super magnified resolution images of a major viral protein complex. That complex is responsible for replicating the RNA genome of a member of the same class of viruses as coronaviruses. Those images provide a window into a whole virus.

“Key breakthroughs often are made not because somebody was targeting an immediate application, but because of general curiosity-driven studies,” he said.

Ahlquist authored a recent opinion editorial in The Hill calling for timely action to cushion the impact of the next pandemic. He suggested allocating resources to priorities such as funding much-needed advances in critical basic research areas and expanding public health infrastructure.

“We have every reason to expect that there will be a next pandemic,” he told WisBusiness.com. He noted in the last few decades, humanity has dealt with the original SARS virus, MERS virus, and now SARS-CoV-2. That’s just one group of viruses.

“So it really looks like coronaviruses have been trying to attack humanity very vigorously for the last few decades … other viruses are doing the same thing,” Ahlquist said.

And the pressure is only increasing. Ahlquist explained humanity’s spread into natural habitats brings animals — and their viruses — closer to people. And globalization allows viruses to spread rapidly worldwide. Another lesson learned, he said, is the next virus is likely to be something different.

But social science plays a role as well. After all, therapeutics and vaccines only work if people use them.

“It’s appalling that when in the pandemic flood a lifesaver in the form of vaccines is thrown out that people are asking, ‘Well I’m not sure, should I grab that lifesaver or not?’” Ahlquist said.

About half the state population has at least one dose of a COVID-19 vaccine. About 43 percent are fully vaccinated, meaning they’ve completed the two-dose vaccine series or got the single-dose Johnson & Johnson shot.

But since the shot was opened up to everybody 16 and older on April 5, doses administered every consecutive week afterward have fallen — even after kids as young as 12 became eligible for the Pfizer vaccine last month.

People can be hesitant to get a vaccine for a number of reasons, including distrust due to a history of racism or mistreatment in some communities, political ideology, religion or misinformation.

“It’s critically important as a society that we deal with these issues and find ways to communicate effectively between the research and medical community and the general public and that we do everything we can to re-establish bidirectional communication and trust,” Ahlquist said. “There’s a growing awareness of that in the scientific community, but we’ve got a lot of work to do there.”

He noted UW-Madison is fortunate this is an area of nationally recognized strength at its Department of Life Sciences of Communication.

“We need to get beyond this vaccine hesitancy,” he continued. “To protect people and to reopen our economy, the single-most-important thing is to vaccinate as many people as possible.”

Morgridge is a member of BioForwardWisconsin, the group serving more than 220 member organizations in the biohealth cluster. Ahlquist said he believes the business community can be a positive partner in moving vaccinations forward.

Over Memorial Day weekend, the U.S. Equal Employment Opportunity Commission updated its COVID-19 guidance, including that federal EEO laws do not prevent an employer from requiring workers to be vaccinated for COVID-19 so long as it complies with ADA and Title VII provisions. Other laws, not in the commission’s jurisdiction, may place additional restrictions on employers.

Last week, GOP lawmakers pushed five bills to ban vaccine mandates and other measures they argued would protect the rights of those who don’t get vaccinated either by choice or for medical reasons.

Freshman Rep. Clint Moses, R-Menomonie and a chiropractor, complained President Biden has said the choice is now to get the vaccine or wear a mask, saying “all these situations are taking away from our freedoms.” While acknowledging some health benefits of steps to combat the pandemic, he argued it’s also been part of an effort to divide the country.

The Wisconsin Medical Society registered opposition to four of the five bills. The society didn’t take a position on AB 316, which doesn’t apply to private businesses.

No matter the outcome, the private sector can play a role in encouraging vaccinations, Ahlquist said.

“We in the research and the medical community also look forward to working with, partnering with, synergizing with your business community to get this necessary work done to move society forward, protect everyone, build confidence and reopen all of our operations.”