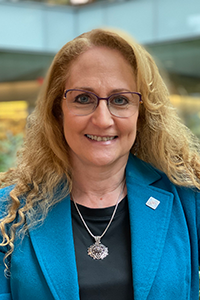 Dr. Jo Handelsman, director of the Wisconsin Institute for Discovery at UW-Madison warns that bacterial infections may follow the coronavirus pandemic.

That could yield a deadly outcome with the increase in antibiotic resistant bacteria.

“That’s something that we always worry about with respiratory infections or viral infections, that they often are followed by bacterial infections which are very difficult to get rid of without antibiotics,” said Handelsman in the Wisconsin Technology Council’s “Crossing the coronavirus chasm” webinar.

She noted that most people who died during the 1918 flu epidemic did so from a bacterial infection that followed the flu. But fewer people died in later flu pandemics in 1957 and 1968, which Handelsman said was due to antibiotics.

According to Handelsman, the CDC predicts that antibiotic resistant bacteria will be the leading cause of death worldwide by 2050 — and WHO concurs. But Handelsman pointed out that some people say that’s even too conservative.

“There could be a lot of deaths between now and then,” she said.

Handelsman argues the population is more susceptible to antibiotic resistant bacteria today because of the increased use of antibiotics for things people didn’t have in the past: cancer treatments, surgeries and transplants to name a few.

“But this is one that if we ignore too long, will get the better of us,” she said. “And there’s still time to keep antibiotics as a frontline defense against bacterial infections.”

Tiny Earth, launched officially in 2018 by Handelsman and housed in WID, is a network of instructors and students focused on antibiotic discovery from soil. The mission of the program is to address the diminishing supply of effective antibiotics utilizing student researchers.

“One of the problems is the length of time it takes to register a drug. Anything we discover today, probably wouldn’t be on the market until 2030,” said Handelsman. “I think this is the time to think about it. If you assume a 10-year lag time… We really need to get going on this.”