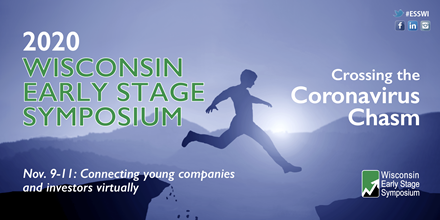 COVID-19 has given entrepreneurs a chance to grow their social media presence by focusing their efforts rather than trying to address all areas of their businesses, said media influencer group Applause! CEO Jon Jacques.

He called the pandemic “a wake-up call” during his keynote address at the 2020 Wisconsin Early Stage Symposium. Jacques added that COVID-19 has created a huge demand for his business since people are seeing less value from traditional physical advertising and marketing campaigns.

Jacques said businesses that were prepared for the shift have done extremely well, but the businesses that didn’t have a significant online following beforehand are struggling.

People are spending more time on their phones browsing social media than before the pandemic, which Jacques said entrepreneurs can use by creating their own strong social media presence to engage with that increased audience size.

He also suggested entrepreneurs start taking advantage of a favorable online advertising market as a way to build their brands and market their products. He noted advertising costs on social media platforms were the lowest they’d been in years.

Jacques recommended entrepreneurs focus on one social media platform and leverage its specific features to gain the largest possible audience. Trying to build a strong audience on multiple platforms at the same time usually results in lots of effort with minimal returns, he said.

With a strong audience on one platform, entrepreneurs can introduce and transfer followers to additional platforms, he continued. Facebook is the best platform to start with, according to Jacques, because it’s the only social media platform with effective “one-to-many communication.” That means the content is easily seen by a large number of people as users share content, he explained.

On the other hand, Jacques said Instagram isn’t a great option for a business’s first social media platform because building a following requires being discovered on the “Explore” page, which relies on hashtag popularity and luck.

It’s important for entrepreneurs to find a role model who has achieved the same social media goals they want to achieve, he said. He added it’s important to use the successful method and model without directly copying their work.

“Go after the people in your space or in your industry who are killing it on social media and see what they’re doing,” he said.

Elements to look for include video length, package and topic. Motivational posts, contests, top 10 lists, how-to and behind-the-scenes videos are proven formulas for success on social media as they gain both a large following and engagement, Jacques said.

“This is how you create a feed that people actually find to be engaging,” he said.

Jacques added that videos need to be “interruptive” to successfully grab viewers’ attention.

“You either interrupt or you’re ignored,” Jacques said. “You need to have ways to capture people’s attention in a split second, or they’re going to scroll right past you.”

His checklist for entrepreneurs making videos: an engaging thumbnail image, a headline that gets viewers’ interest, a clear hook in the first three seconds and a clear call to action at the end.

Culver’s saw a 4 percent increase in sales in 2020

For questions or assistance, please contact: Colin Schmies at [email protected]om or 608-206-0476