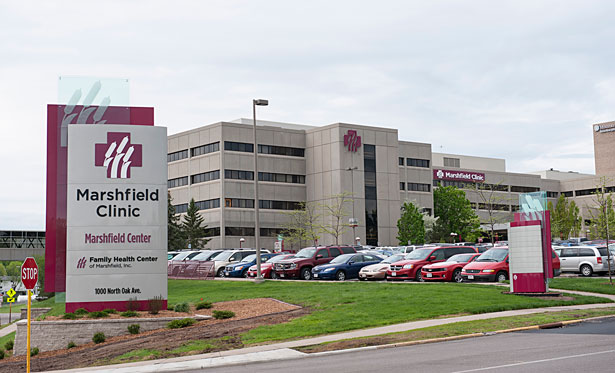 Before COVID-19, telehealth was used by patients primarily to see specialists often located halfway across the state. Due to insurance regulations and reimbursement rules, patients had to use the telehealth services in an approved location, such as a clinic, hospital or nursing home.

When COVID struck, hospital systems such as Marshfield Clinic and UW Health knew they had the ability to continue seeing patients via telehealth. But one challenge: no reimbursement for the patient being in their own home during the virtual visit.

Marshfield Clinic started ramping up its already existing telehealth process on March 16 and nine days later, when the state’s “Safer at Home” order took effect, it had its first patient across the updated platform. The biggest cost for the health system was for people — it had to train all 1,500 providers in one week after only 150 doctors were using the telehealth platform pre-COVID. Meyers’ team went from a staff of 14 to 80.

UW Health also rapidly ramped up video visits — investing “hundreds of thousands” in hardware and software licensure and peaking at 1,500 virtual visits per day mid-pandemic, according to Elsa Jacobson, director of telehealth at UW Health. The health system continues to conduct more than 1,000 visits per day while beginning to open back up.

Marshfield’s telehealth program has been largely funded by federal grants. About $150,000 of that went for iPads for health care workers to communicate with patients without going in and out of rooms due to COVID-19.

In 2019, Marshfield Clinic had about 3 million patient encounters, and about 12,500 of those were through telehealth. While that’s a small percentage, it saved patients 1.3 million miles of travel. From March 25 to June 1 of this year, the hospital system had 60,000 telehealth appointments.

Of those 60,000, 57 percent were done via telephone and 43 percent via two-way video. However, 5 percent of those who completed their telephone visit actually scheduled the appointment as video, but were unable to connect.

Patient satisfaction scores have been high for both hospital systems. Patients and providers want telehealth to become a permanent form of care. Marshfield Clinic actually exceeded all its patient satisfaction goals — except for connectivity.

“That means that the patient was able to complete the visit with bandwidth at home,” Meyers said. “We did see some challenges with patients especially in rural areas not having sufficient bandwidth to do visits.”

In addition to patient dissatisfaction surrounding broadband, Meyers said providers get frustrated by the lack of broadband, because it’s a missed opportunity of valuable care.

“Unfortunately, there are a lot of areas especially the further north you get in Wisconsin where telehealth is still very difficult to deliver because of lack of broadband,” said Meyers, who also serves on the Governor’s Task Force on Broadband Expansion.

Jacobson noted that it’s not just a patient issue, but also a workforce issue.

“We have a large workforce that does patient scheduling — a lot of that phone-based work. We can send people to work from home if they can have broadband,” she said. “We actually have a number of employees whose work can be done safely and effectively remote, but they don’t have access to broadband in the areas where they live.”

Many of those people live the farthest away from work, so they have the longest commutes to the office.

“What is going to come out of all of this experience is that better understanding that broadband really needs to be something we’re pushing in Wisconsin,” Meyers said. “We need to get more people connected. We can keep people in their homes longer, keep them independent longer if they have access to broadband. If they don’t, unfortunately that’s the barrier. I think a lot of the focus we’re going to have over the next several years is really moving the needle on Wisconsin understanding broadband.”

Marshfield Clinic stands firm that up to 33 percent of health care can be done via telehealth.

Meyers noted several cases in which patients won’t make the trip to the doctor’s office, such as embarrassment or stigma around things like mental health for example, and just not being able to justify the drive.

“As a healthcare organization, it’s our job to keep our patients healthy. And if you think about Wisconsin roads, the winter can be pretty treacherous and in the summer there are deer,” Jacobson said. “Whatever we can do to keep patients in their local communities actually helps improve health. Driving is not without risk, and it just helps remove one more potential hurdle to make care easier to access and to keep patients safe wherever they may be.”

As far as coverage, Meyers said insurance companies argue that overutilization of healthcare results in higher premiums and health care costs. However, Marshfield Clinic has not seen evidence of that. It has only replaced 22 percent of its lost business with telehealth. Since not all visits can be done virtually, Meyers argued that overutilization is not a barrier to telehealth.

Jacobson said UW Health is facing this question before committing long term to more telehealth: Will Wisconsin follow other states in legislation that ensures coverage and parity for telehealth payments?

“The president’s executive order seems to be a good thing from the standpoint of continuing telehealth after COVID in much the same way we are today,” Meyers said. “We support maintaining those flexibilities toward delivering care in two-way video and phone. We’ve worked with other health systems and national organizations to make the case for those reimbursements being made permanent.”

Meyers said the health system is still watching exactly how those reimbursement flexibilities are made permanent while noting changes are likely.

“I do think that in a post-COVID world, telehealth will be far more prevalent in your healthcare than it was before,” he said, adding that it’s not inconsistent with other industries such as entertainment and banking, which can be done through mobile apps.

Culver’s saw a 4 percent increase in sales in 2020