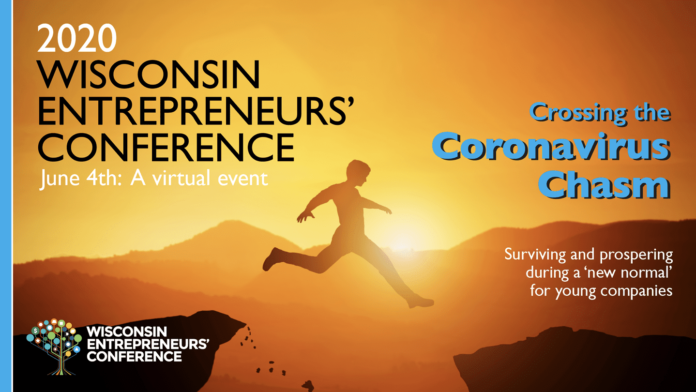 Brian Pinkerton, keynote speaker at the Wisconsin Technology Council’s virtual 2020 Wisconsin Entrepreneurs’s Conference, emphasized that technology is a tool and what matters is how people use it.

That’s coming from a guy with an extensive technology background. Pinkerton is Apple’s chief architect for Siri, an alumnus of the computer science department at UW-Madison and the creator of WebCrawler, an internet search engine that is the oldest surviving search engine on the web today.

When Pinkerton first built WebCrawler, he had about 10 users who were predominantly his circle of friends. But after about eight months, it was already taking up a third of his graduate school alma mater’s bandwidth and people all over the world were using it.

“I had no conception of what it meant to have over 200,000 people using my product,” said Pinkerton. “It was insane. It was daunting.”

He said that oftentimes, people who build technologies don’t think about the impact they may have on people until there are unintended consequences. As an example, Pinkerton noted the business of a search engine — advertising — works against the search engine user experience. The tension, he said, has to be healthy between ads, content of ads and organic search results.

The same is true with social media, such as Facebook, to which Pinkerton said: “There is no way that anybody anticipated what was going to happen. It grew way faster than we could grow our legal mechanisms or even our social mechanisms to understand it and respond to it. That is really the danger.”

“I think that this is a time that we have to ask companies to do a more rigorous job of being citizens of the world and not promoting their own growth,” he said. “There is plenty of that growth. Now is actually the time to think about doing the right thing.”

Using artificial intelligence as an example, Pinkerton noted in today’s current climate, with the nation’s attention on racial disparities, AI will have to be stripped of its human biases.

Pinkerton explained that most of what is being deployed with AI today is just a faster replication of what humans are good at.

“But if you think about AI making decisions that humans have previously made… if humans have bias, so does the AI,” he said.

“Guess how that turns out? Not very well,” he said. “One of the things that we have to do here is critically evaluate this stuff as humans and say, ‘How are we going to think about providing data to the system that is actually blind to these kinds of influences?'”

Pinkerton suggests taking out problems such as zip codes as a field for machine learning. What would be even better, according to him, is finding the factors that really matter. This might even be data not available yet, such as a credit history of somebody or three factors that identify an individual’s ability to repay a loan. Those are things “that (cut) across ethnicity, place and economic strata.”

“So you’ve got to go find out, you’ve got to attack that bias at the source, figure out what signals you need, get those, and try again,” he said.