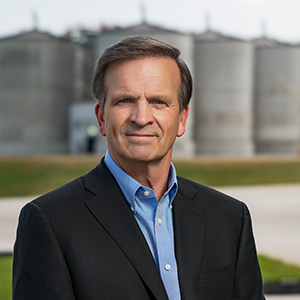 Ethanol producers and corn growers in Wisconsin say the Trump administration’s move to exempt certain refineries from biofuel requirements is harming their industries.

Mark Marquis is CEO of Marquis Energy, which has operations in Wisconsin and Illinois. He says the company’s Necedah plant has had to cut ethanol production and corn purchases due to low margins, driven domestically by the small refinery exemptions recently approved by the EPA.

Wisconsin Corn Growers Association President Doug Rebout notes “quite a few” ethanol plants in Wisconsin and across the Midwest are either shutting down or cutting back operations due to the exemptions, leading to lower ethanol demand.

“At this time of year, when we’re about to start harvesting, we need as many markets open as possible,” Rebout said. “These exemptions are limiting our markets.”

The EPA recently moved to issue new waivers for 31 fuel producers, removing the requirement for blending ethanol into the fuel they make.

Marquis (pictured here) explained that about 44 percent of all the corn grown in the United States goes to ethanol plants, making them the largest market for corn farmers in the country. He said the new small refinery exemptions, or SREs, cover about 10 percent of that market.

“Farmers view ethanol and corn as going hand-in-hand; that’s why the farmers watch what happens,” he said. “They understand that allowing 10 percent to not be blended, that takes away 10 percent of your market, bringing down corn demand and the price of corn drops.”

Rebout describes a “perfect storm” of unfavorable weather, uncertainty in global trade markets, low commodity prices and now these exemptions — “they’re really impacting us on our farms, what we’re getting paid.”

When the price of corn falls, the impact is felt directly by farmers in the state, according to Rebout. At his operation, Roger Rebout and Sons Farms in Janesville, a 25 cent drop in price on 500,000 bushels of corn costs the farm $125,000.

“And when we get impacted, it doesn’t just impact us. It impacts our communities,” Rebout said. “We’re not out there spending the money … it’s a snowball effect.”

Marquis says he’s been hearing similar stories from the corn growers that sell to him.

“We think the small refinery exemption waivers have been abused, and have been overused,” he said.

The EPA has pushed back on the criticisms leveled by corn growers and ethanol producers, saying there’s no evidence the waivers have lowered demand for ethanol.

Marquis argues that stance “doesn’t make any sense,” claiming the waivers were issued purely to benefit the oil and gas industry at the expense of corn growers and ethanol producers.

Under “normal conditions” of healthy profit margins, Marquis said ethanol producers tend to operate at full production capacity, even though efficiency isn’t being maximized. When production is slowed, efficiency rises as the corn mash ferments longer and produces more alcohol.

“It’s a trade-off, where with decent margins, you want to run as fast as possible,” he said. “If margins aren’t good, then we slow down.”

While some ethanol plants are shutting down, others — like the Marquis Energy plant in Necedah — are lowering production levels. They might be losing money on every gallon, but Marquis explains they’d be losing more by shutting down completely.

While the Necedah plant is cutting back on production, another ethanol plant run by Marquis Energy in Illinois is still running at the same capacity. Marquis explained that facility has “more favorable logistics” and can participate more easily in the export market.

“Margins haven’t suffered as much in Illinois,” he said. “Wisconsin is more challenged on the margins.”