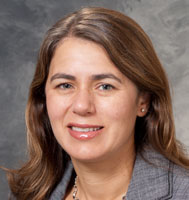 A researcher with the UW-Madison School of Medicine and Public Health is seeking to improve patient monitoring during anesthesia with a new wearable ultrasound device.

Guelay Bilen-Rosas was a featured speaker at this year’s WARF Innovation Day, held yesterday at Monona Terrace in Madison. She’s a physician with more than 20 years of experience under her belt, and oversees the pediatric transplant anesthesia program at UW Health.

When patients are put under anesthesia for operations, they can’t breathe on their own so specialized machines must do it for them. Physicians and anesthesia teams keep track of their breathing with a number of monitors, but Bilen-Rosas says there’s a major problem with that process.

“Currently, standard monitors that are available to us are not respiratory monitors — they measure heart rate, blood pressure and oxygen,” she said. “They’re indirect monitors; they do not measure breathing. They measure that effects that happen to the body after a respiratory event has occurred.”

When one of those indicators is off, the system sounds an alarm. But Bilen-Rosas says that can come after the patient has been in a low-oxygen state for an unknown period of time. That can delay responses by the team providing care, and sometimes intervention can occur too late.

“We’re risking at that time injury to the brain and to the heart, and even death,” she said.

In the absence of truly direct monitoring, Bilen-Rosas says physicians like her have to fall back on their experience, sometimes making an “educated guess” about the breathing status of certain patients.

And since what she calls “clinical clues” are largely subjective, it’s impossible to teach that level of airway skills to any provider, no matter what their skill level is.

“It’s quite frankly dangerous,” she said. “To fill this need, our group is working on a noninvasive wearable respiratory device that will monitor your breathing directly in real time.”

She said the device could provide immediate alerts when breathing changes occur by using ultrasound pulses. By sending signals to the neck region, the ultrasound signal is altered in the windpipe by the airflow that accompanies normal breathing. That altered signal can be measured, as it correlates directly with respiratory rates.

Bilen-Rosas’ team has received multiple phases of funding through the WARF Accelerator Program and has used that money to create a prototype that’s being used to collect data from patients.

She says breathing complications during procedures represent “a very big, dangerous problem,” the scope of which is difficult to fully capture.

“It’s very hard to accurately tell you how big that problem is,” she said. “How can you identify and report something if you do not have the tools necessary to actually measure it?”

Still, she said the economic burden of “even minor medical complications” such as a drop in oxygen levels resulting from sedation is $2.2 billion per year in the United States alone. And she said that doesn’t account for severe complications or even death.

“We’re looking to commercialize the technology to make a big health care impact, and to improve the outcomes for our patients,” she said. “Because you know, ultimately at the end of the day, it is about our patients.”