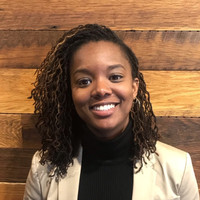 Many startups face similar struggles as they work to define their own brand, develop products and secure investment. But as one Milwaukee investor points out, not all entrepreneurs have access to the same resources and support systems.

Dana Guthrie is the managing director and founder of Alchemy Angel Investors, as well as a product manager for Johnson Controls. She moved to Milwaukee from St. Louis about 13 years ago to attend the Milwaukee School of Engineering.

As she progressed through her education, Guthrie began researching the process for launching and growing companies. That eventually led her to create Alchemy Angel Investors, but only after she realized the deck wasn’t exactly stacked in her favor.

“I learned about this thing called the friends and family round, and this was one of the biggest things that stood out to me,” Guthrie (pictured here) said at this week’s Wisconsin Entrepreneurs’ Conference in Milwaukee.

According to her, the average ‘friends and family’ early-stage investment round brings in between $50,000 and $100,000. Startups often use those funds to jumpstart some revenue, so they can obtain additional money from venture capital firms and continue growing.

“There was just no way I could raise that money in order to get my thing off the ground,” she continued. “So when I thought about launching Alchemy, that was one of my points.”

She stressed that her angel investing firm isn’t exclusive to any one demographic. But she says she does have “an appreciation for someone who’s hustling and trying to figure it out — and you can’t go to your rich uncle.”

As an African American, Guthrie shared her perspective as part of a panel focused on two often-paired words: diversity and inclusion. Although many companies have cultural sensitivity programs aimed at improving these measures, several panelists said the terms are still sometimes poorly understood and misused.

“The important thing here is, inclusion needs to care about somebody,” said Ben Juarez, another panelist representing Milwaukee-area Cream City Coders. “Inclusion means I want to include you in something, because whatever you’re bringing to the table, I want to know about it.”

Guthrie explained that inclusivity goes beyond diversity, and can be much more valuable.

“If you were to invite me to your home for dinner… I come, I’m sitting at your table with your family. All of the conversation is in the context of family dynamics that I know nothing about,” she said. “I can’t add to the conversation in any way but … there is someone different at the table. That’s a diverse situation.”

Expanding on that example, Guthrie said an inclusive situation would involve friendly personal questions and other attempts to make her feel more welcome.

“Now I’m feeling a little more included in this conversation,” she said. “I’m participating in the group… and then I like to take it one step further, where it’s equitable.”

An equitable version of this scenario, she said, would begin with a discussion rather than a decision.

“Instead of us immediately going to your house, let’s have a conversation. Are we having dinner at your house or my house? Should I bring something?” she said. “One, when I show up, there’s a higher likelihood that there’s something on the table that I actually like. And then two, maybe you’re also trying something different that you didn’t know you’d like.”

Elmer Moore Jr., another panelist and co-chair of the Entrepreneurs’ Conference, said Guthrie’s analogy “really drives home the power and value of this conversation” in the business context.

“Frankly, too often [diversity and inclusion] are used to point fingers… to make people feel reminded of what they’re doing wrong,” he said.

“And by the way, for you to invite me into your home is amazing,” Guthrie added. “That’s awesome in and of itself, but including me in the conversation and taking in other ideas that maybe you didn’t think about, is totally different.”